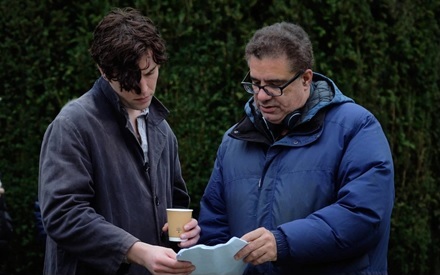 Tom Hughes, left, who plays Robert Graves, with director William Nunez CREDIT: Laura Radford
WRITER Robert Graves was so badly wounded at the Somme he was thought to have died – and later wrote of his lasting psychological scars. Now, in portraying the poet and novelist in a film, writer-director William Nunez has found inspiration in the post-traumatic stress disorder (PTSD) suffered by three of his own friends in more recent conflicts. Each of them served in Afghanistan and Iraq and, after returning home, struggled with psychological trauma, Nunez told The Sunday Telegraph. One took his own life two years later. Nunez immediately saw parallels with Graves’s struggles, which he will portray in his film, The Laureate, due for release later this year. The film is set in the mid-Twenties, when Graves was traumatised and struggling creatively following his experiences in the First World War. It tells the story of the writer’s ménage à trois with his first wife, Nancy Nicholson, and the American poet Laura Riding – an affair that scandalised society. Nunez, an award-winning former television director for CNN and NBC, described how Graves was left for dead after shrapnel pierced his lung at the Battle of the Somme: “He came to in a makeshift hearse with other dead bodies on the way to burial. “His parents received a death notice from the Army and his obituary was even published – an event which stayed with him forever.” He added: “When mates started coming back from Afghanistan and Iraq, I noticed they were getting divorced or keeping away from friends, including myself. I rewrote the script. “One friend who’s no longer with us couldn’t hold a job … His wife and some of my other friends told me that he’d witnessed children getting killed and … his own friends being shot by our own troops by mistake.” Nunez drew on their experiences in portraying Graves’s turmoil’s, which could be triggered by the slightest incident, even the ringing of a phone. As part of his research, Nunez spoke to one of Graves’s friends, who remembered a group get-together shortly before his death in 1985: “All of a sudden Robert’s face went blank and he was staring. They asked, ‘Robert, are you, all right?’ He blurted out, ‘I killed people.’ He stayed in a comatose state for a while and then came back.” Tom Hughes, who played Prince Albert in the ITV drama Victoria, plays Graves in the film, with Julian Glover, the Olivier-award-winning actor and Graves’s godson, as his father. Nunez also turned to Combat Stress, the UK charity for veterans’ mental health, which arranged for its clients to speak to Hughes and Laura Haddock, who plays Nicholson, to “understand the effects of what it’s like to be married to someone with PTSD”.

Read the original article by Dalya Alberge in The Sunday Telegraph, 22 Mar 2020